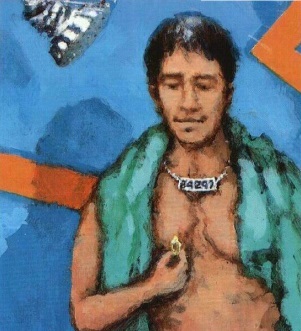 Gareth climbed out of the freezer. He knocked a few I small pieces of ice from his clothes, and stood up. He shook his head. A freezer technician was standing next to him. She was wearing a silver metal suit.
'Name?'
'Gareth … Gareth Palmer.'
'Number?'
'Beta 4297.'
'Job?'
'Garden Technician, Class Four.'
'What are six threes?'
'Eighteen.'
'And nine fours?'
'Nine fours are thirty-six.'
'Where are you?'
'On the New Adventurer.'
'Where are we going?'
'To the star Orelia. Planet Five.'

<spoiler|Read further> The freezer technician put down her pen. She turned to the doctor. 'He's all right. No problems.'
She turned back to Gareth. 'You're OK, Beta 4297. You can go to your room. Dinner will be in forty minutes. Report for work at 18.00 hours.'
Gareth walked out of the Freezer Room. He was always a little nervous. It didn't happen very often, but every two or three months, someone didn't wake up, or they did wake up but they couldn't remember who they were or what they were doing. He thought about Philip. Philip was a garden technician, too. When he woke up last year he was like a baby. He couldn't speak or feed himself. They put him in the hospital for tests, but there was nothing they could do. They had to kill him. There was no room on a starship for passengers.
Gareth hurried to his room. He wanted a shower. That was always the first thing you wanted after two weeks in the freezer. He found his room, stopped and looked at the sign on the door.

He opened the door and went in. The room, as usual, was empty. He took his key from his pocket and opened his cupboard. He took out a work suit and laid it on the bed, and then he took off the metal freezer suit, and put it in the cupboard. He got in the shower, and turned on the hot water. He felt better immediately. He stood in the shower for two minutes, then the shower turned itself off. Two minutes was the longest time you could have in the shower. Then he saw something in the bottom of the shower tray. A little piece of gold metal.
He picked it up. It was an earring. A small gold earring. 'Alpha 3461,' he said to himself. 'So, Alpha 3461 is a woman.' He smiled. He had never met Alpha 3461, of course. She was in the freezer now. She was going to be there for two weeks, then Gareth had to go to the freezer, and Alpha 3461 could come back to the room for her two weeks. Alpha and Beta workers never met. There were a lot of rules. You couldn't leave anything in the room. Everything had to go in your cupboard. Nobody ever asked about the other workers. It was easier.
Gareth put on his work suit. He put the earring on the table. He looked at it for a minute. He knew nothing about Alpha 3461. They had used the same room for three years now, and they were going to use it for seven or eight years more. He didn't know what she looked like, how old she was or what she did.