Never argue with taxi drivers. I’ve tried to tell Ray that before. But he never listens.
‘Twenty pounds!’ he said. ‘I’m not paying you twenty pounds, mate. We’ve only been travelling for about ten minutes!’
Anyway, the taxi driver threw our bags out. Then he grabbed hold of Ray’s shirt.
‘Hey, Croc!’ he shouted. ‘Get this gorilla off me!’ ‘Who are you calling a gorilla?’
‘Come on, Croc! Hit him!’
‘Hit him yourself,’ I said. ‘It’s your argument, mate, not mine.’
After Ray paid him, we went through the big iron gates.
‘Hey, Croc … it’s a nice house, eh?’
‘Yeah,’ I said, ‘it’s OK.’ I wasn’t feeling too good. I think it was the airline food. They give you a meal every couple of hours, and it’s a long way from Australia. I wanted to sleep on the plane, but Ray was sitting next to me. He only stopped talking when he started eating. Now I think about it, he was talking while he was eating, too. We had first class tickets on QANTAS. First class all the way from Brisbane via Sydney and Singapore to London. I never wanted to see a plane again. Not ever.
Well, we were here now. This was Great-aunt Edna’s house. She was the one who sent me the tickets. That was a laugh. ‘Tickets for you and a manservant,’ the letter said. A manservant! It was a pity, really. Ray was there when I opened the letter, and he read it.
‘Come on, Croc,’ he said. ‘A free visit to England! We’ve never been abroad before.’
‘I’ve never heard of a Great-aunt Edna,’ I said. ‘She’s heard of you, mate. Look, I can be your manservant. We’ll have a great time.’
‘But you’re my boss, Ray.’
‘Not any more. Not since we lost the boat. Look, you’ve got the tickets for the plane. I’ll pay for everything else.’
Ray takes tourists around Queensland. I help him. That’s how I got the name Croc. Ray always tells them that I’m a crocodile hunter. He used to have a boat, the old Australian Queen, but that’s another story.
An old man in a black suit opened the door. ‘G’day, mate,’ said Ray. ‘This is Mr Preston.’ The old man looked us up and down.
‘It’s all right, mate. We’ve got invitations. Look.’ Ray pushed the letter at the old man. He read it, and looked us up and down again.
‘Would you like to go through to the garden, sir,’ he said. ‘There’s a buffet lunch. You can join the other guests. Your manservant can wait in the kitchen.’
Ray’s face went red. ‘Look here, mate …’ he started.
‘He’s coming with me,’ I said. ‘OK?’
“Well, sir, this is most irregular …’
I suppose there were about fifty people in the garden. They were all talking in those upper-class English voices. They sounded like a lot of horses to me.
Ray started on the food straight away. It wasn’t much of a buffet. A few sandwiches and biscuits, that’s all. The sandwiches were the smallest I’ve ever seen.
‘Good afternoon, Mr Preston. I’m your cousin Beatrice.’
I looked around. This tall blonde English sheila was standing right behind me.
‘Hello there, Beattie,’ I said. You can call me Croc. All my friends do.’
‘I prefer “Mr Preston”,’ she said. ‘And my name is Beatrice, not Beattie.’ She wasn’t smiling. Some of the English are like that.
‘All right,’ I said. ‘Here. Have a chicken sandwich. They’re a bit small. Take four or five.’
‘I’m a vegetarian,’ she said.
‘Oh, yeah? I’m a Sagittarius myself. I was born on 5 December. Of course that’s mid-summer in Australia.’
She just looked at me. She thought I was pretty stupid, I could see that. She didn’t have much of a sense of humour.
“We don’t get much chicken in Queensland,’ I said. ‘Just kangaroo meat. Have you ever eaten kangaroo?’
Her face went green, and she turned and walked away.
I was going to tell Ray about her, but he was talking to an Englishwoman. ‘That’s right, darling,’ he was saying. ‘I’m Australian. How did you know?’ 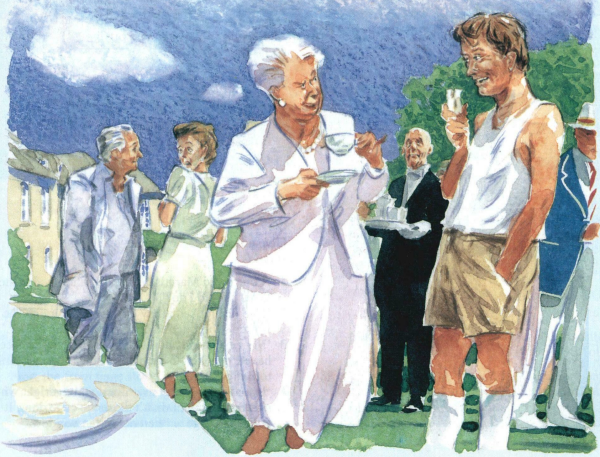 Then this elderly lady with grey hair came over.
‘Beatrice tells me that you’re Mr Preston,’ she said. ‘I’m your Great-aunt Edna.’
‘Auntie!’ I said. I was going to give her a big kiss on the cheek, but she stepped back.
‘I’m your great-aunt by marriage,’ she said. ‘We aren’t blood relatives. My husband was your great-uncle.’
‘Oh, right. I didn’t know that I had a great-uncle. Do you know where he is?’ I looked round at the people in the garden. Which one was he?
‘My husband’s dead,’ she said. ‘He died two months ago.’
‘Oh, I’m sorry, Auntie,’ I said. Just my luck. You find a relative one minute. The next minute he’s dead.’
‘His brother was your grandfather,’ she said. ‘He emigrated to Australia … rather quickly, I’m afraid. There was some trouble … some trouble about money.’
‘I bet there was,’ I thought. My grandad was a
real old rogue. Slippery Sid, that’s what they used to call him in Woonawarra. Poor old Sid. I lived with him after my dad died.
‘Well, it’s nice of you to invite me here, Auntie. Very nice.’
She gave me a strange look.
‘But surely you know why you’re here, Mr Preston,’ she said.
‘I’ve got no idea at all, Auntie,’ I replied. ‘Not a clue.’
‘My husband was the Duke of Hampshire,’ she said. ‘We have no children.’
I looked round at Beatrice. She was talking to Ray. Her face was still green. Ray was telling her about crocodile meat.
‘Beatrice is my husband’s sister’s grandchild, his younger sister’s grandchild,’ she said. ‘Anyway, Auntie, why am I here?’
The old butler in the black suit came over. ‘Would you like a cup of tea, Your Grace?’
‘My name’s not Grace,’ I said. ‘Who are you calling—’
Auntie smiled. You really don’t understand what’s happening, do you, Mr Preston?’
‘Eh?’
‘You are now the Duke of Hampshire, and this house is yours. All yours. “Your Grace” is the correct form of address for a duke.’
I turned round and grabbed Ray. ‘Hey, Ray. Did you hear that conversation?’
‘No, Croc,’ he said. ‘Why?’
‘Good,’ I said. ‘Come on, mate, let’s go. We’re catching the next plane back to Australia!’