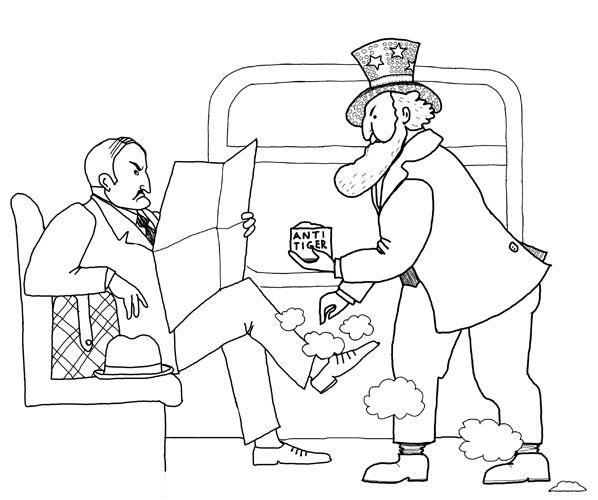 – Mr White was sitting on – train which was travelling from – Glasgow to – London. – train was quite – empty and – quiet so – Mr White was finding – journey enjoyable and relaxing. At – Birmingham, – man with – long beard got onto – train. He looked – little eccentric. He had – pink trousers, – yellow shirt with – green tie, – silver hat, – orange socks and – bright red shoes.
After – few minutes – man opened – small brown bag and took out – some fine white powder. It looked like – chalk dust. He started to throw – powder around – railway carriage. He continued doing – this for about – five minutes. Then – he smiled to himself and sat down. – Mr White ignored him and kept on reading – his newspaper.
However – twenty minutes later – man took out – his bag again and sprinkled – white powder around – carriage. – Mr White continued to ignore – man. However – man kept scattering – his powder around – carriage – every twenty minutes and – this began to irritate – Mr White. After – two hours – Mr White asked angrily, “Excuse me, but what are you doing?”
– man stopped throwing – white powder and said, “Look in – my bag, – sir. This powder is – no ordinary powder. This is – ANTI-TIGER DUST. It's – very special, very rare and – very expensive.”
In – irritated voice – Mr White shouted, “But why are you throwing it around – this railway carriage?”
“Ah,” said – man. “By sprinkling it around – carriage I am keeping all – tigers away.” Mr White was astonished. How could – anybody be so stupid, he thought to himself. He protested to – man, “But there are – no tigers around here!” – man smiled and said, “That's why there are – no tigers around here.”

zero Mr White was sitting on a train which was travelling from zero Glasgow to zero London.

The train was quite NA empty and NA quiet so z Mr White was finding the journey enjoyable and relaxing.

At zero Birmingham, a man with a long beard got onto the train.

He looked a little eccentric. He had zero pink trousers, a yellow shirt with a green tie, a silver hat, zero orange socks and zero bright red shoes.

After NA a few minutes the man opened a small brown bag and took out NA some fine white powder.

He started to throw the powder around the railway carriage.

He continued doing NA this for about NA five minutes.

Then NA he smiled to himself and sat down.

Mr White ignored him and kept on reading NA his newspaper.