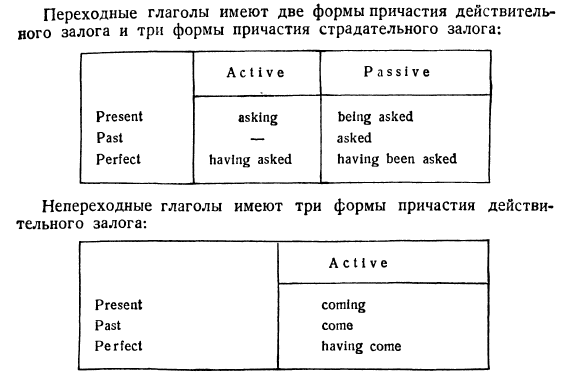 I.
1. They passed groups of farm-workers trimming vines and picking ripe apricots.
2. From time to time you will get letters notifying you of my movements.
3. There is a covered passage connecting the kitchen with the garage.
4. A gloomy darkness covered the little hill overlooking the two valleys.
5. When you enter the hall you will see a staircase leading to the basement.
6. A new road will soon be built joining the plant with the railway station.
7. What we really want is a good critical article revealing our drawbacks.
8. He spoke like a man having his opinion of everything.
9. The horse leading the race was the winner of a similar event two months ago.

II.
1. She smiled remembering the joke.
2. Every now and then the man raises his head from the book, looking at the clock on the opposite wall.
3. I hope you will write soon, explaining your intention.
4. Closing the door gently, she stole upstairs.
5. Receiving no reply by the end of the month we shall consider the order cancelled.
6. Taking a book from the shelf, he sits down under the floor-lamp to read it.
7. In the evening they caught some fish, eating part of it and saving the rest for breakfast.
8. Being very unambitious, he is satisfied with what he has.

III.
1. Having got what he wanted, he took his hat and went away.
2. Having seen so little of the country, I’m afraid I cannot give exhaustive answers to all your questions.
3. We shall not discuss our future plans before I come back having settled the business.
4. And saying so, he left the room.
5. And having said this, he threw himself back in his armchair and looked around triumphantly.
6. Having arrived two days before the opening of the conference, they had enough time to do the city.
7. Arriving at the airport, he went to have his luggage weighed and registered.
8. Knowing how fond he is of good music, I brought him a few records.
9. Having known him from school, I have never heard anyone speak of him without respect.

IV.
1. Special mention must be made of the extensive research now being conducted in chemistry.
2. A party of specialists was sent to inspect the installations then being made at the new metallurgical plant.
3. That method of support was quite different from those being employed at the time in other mines.
4. They were told that unlike twenty years ago the machine tools being used at the factory were exclusively home-made.
5. Being asked what he thought of the innovation, the engineer said he approved of it.
6. The yacht lay well out in the middle of the river, being carried down by the current.
7. Having been examined by the customs, the goods were let through.

From time to time you will get letters which will be notifying you of my movements. = будут извещать вас (в указанный/определенный/известный/обговоренный/условленный момент или отрезок времени) → фактуальное

From time to time you will get letters which will notify you of my movements. =будут извещать вас (вообще, как это всегда и происходит и в не обговоренный/условленный момент времени) → не-фактуальное

что блокирует создание одной общей пространственно-временной и субстанционной структуры в предложении From time to time you will get letters notifying you of my movements?

Every Monday you will get letters notifying you of my movements

Every Monday you will get letters notifying you of my movements

верно, а можно и еще больше фактуализиторов накидать: during your trip; on the day of your …; from Monday till Friday и т.п.