1. I entered the bathroom right after Brent came out and the stink hit me like a punch in the nose!
2. Okay, fast forward to the moment of truth. The boxer winds up and gives Bob a good punch on the nose.
3. The best place to punch someone would be where it would hurt him or her most. This would actually vary with person you intend. For Most people, a punch on the face or the stomach would be the best place to punch.
4. Now, I do have this possible scenario factored into my risk assessment; so it is not an unexpected punch on the face like you normally get from your mistress/girlfriend/wife in that order.
5. And Carol takes him to task for it, and incidentally proves herself to be ten times the hero he’ll ever be - by giving him the punch in the face he so richly deserves. 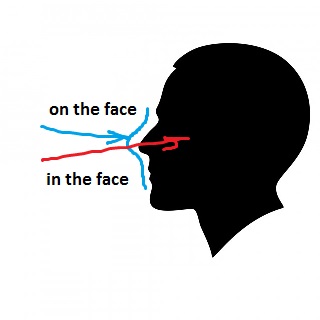 The joke is on them. = это они так шутят = люди говорят → почему on?

Сказать правду в лицо → in или on ?
in
коррелирует с “захлопнуть дверь перед кем/чем-либо”: She ran into the building and slummed the door in the bear's muzzle